Respect is a non-negotiable

An update on bargaining from your JCEA BOAT team

For those of you who joined us for bargaining this week, it’s increasingly apparent that the district’s chief spokesman, David Bell wants to control the process and outcome of our negotiations. The reality is, districts are more functional when educators have the right to bargain over working conditions, learning conditions, and compensation and we expect that the district will arrive at the table prepared and respectful of the process. JCEA has been negotiating with Jeffco management for more than 50 years and the educators volunteering their time to participate take it seriously. If the tone and tenor at the table continue to decline, we will be encouraging our members to take action to demand a respectful and balanced process.

The members of your team are spending 10-20 hours a week, and on weekends, outside of contract time to continue to develop their bargaining skills, meet with constituency groups, research budgets, surrounding districts standards, and national best practices, review member survey data, and draft language that we believe will improve not only the lives of Jeffco educators but our students. The district continues to drag their feet with counter-proposals and even suggested canceling a scheduled session for “independent work time” so their team would be prepared for our next session.

If educators can find time to do this important work, the district must as well.

Our facilitators are trying to help the teams set a timeline. JCEA has pushed for that for a few sessions and we know they have had several offline conversations about it. When will they set a path forward? JCEA has been proactively working hard to be done with bargaining by the end of May or early June at the latest. Your team needs support in helping hold the district accountable to this timeline.

It’s been six years since the contract was last open, and that year we went from 118 pages of negotiated language to 64 pages to try and hold on to your collective bargaining rights under the anti-union, anti-teacher school board of WNW. The District only picked four articles to put proposals forward on this year, while JCEA is proposing changes to almost all the articles.

Our neighbors to the south in Douglas County, unfortunately, have lived through the consequences of educators being stripped of their rights, and today, nearly 10 years later, DCSD educators still have not regained their right to collectively bargain.

How long does district management expect Jeffco educators to wait for that wound to be healed and the contract to be restored to the levels you had for decades before? Are they hoping you will all just get tired and give up?

Before this week’s session, JCEA had presented eleven articles with only three counter-proposals from the District management team. The district has now presented three articles and JCEA has counted two of those. (we’re waiting to counter Article 17 until our salary survey for members is completed.)

Respect at the bargaining table and respect in our schools.

The District is digging in on not wanting to add anti-bullying language to protect educators from bullying administrators; not wanting to guarantee JCEA representatives on District and Board committees where we’ve had reps for decades, and refusing to formalize JCEA’s participation as PARTNERS in supporting Jeffco’s new educators. Your union is not a lunch catering service, and we expect to be included formally in new educator induction each August.

Articles 15 Temporary contracts and 18 position hold were countered by the district. There were few changes proposed by JCEA—the District struck all of them.

Then, with a few minutes to go until 9, the District refused JCEA’s request to present their article 4 (Negotiations Procedures) counter. The District originally presented their proposal for this on February 25, then JCEA had countered this language a week later on March 3. We sincerely hope that the district will arrive on April 5th prepared with substantive responses to our previous proposals.

All member survey on your financial priorities for 2021 HERE

For months now, the District has said they’ll have to cut $50 million or more from our Jeffco budget. They are talking about furlough days for all employees (essentially salary cuts) position cuts, and more. Two doom and gloom financial presentations have been made to your bargaining team and it’s abundantly clear that they are starting from an assumption that not only will there be no money allocated for front line salaries this year, they expect us to take cuts. In fact, that was the first item at community budget meetings.

Quite frankly – it’s time to call the district’s bluff.

Jeffco has been carrying a huge budget surplus for years to the tune of $108 million as of June 2020. Even with a projected $42 million spend down this year, reserves are still healthy. Still, based on what we have heard from the district, any salary increases or additional resources will be hard-fought.  All signs point to a better state funding scenario than the district is presenting.

Our all-member survey is open NOW through April 12th – please encourage every JCEA member to participate!

Today, the U.S. Department of Education granted Colorado’s assessment waiver request to scale down CMAS testing this year to language arts tests for students in grades three, five, and seven and math in grades four, six, and eight – and added the requirement of the science test for 8th grade. Waivers for science testing for grades five and eleven were granted.

Thank you to everyone who made calls, signed petitions, attended events, and took action for #CMASRelief! What a fantastic reminder of what is possible when we work together towards a common goal!

Here’s to being a step closer towards a future where the resources and funds we put into CMAS testing are instead used for supporting our students and educators instead. 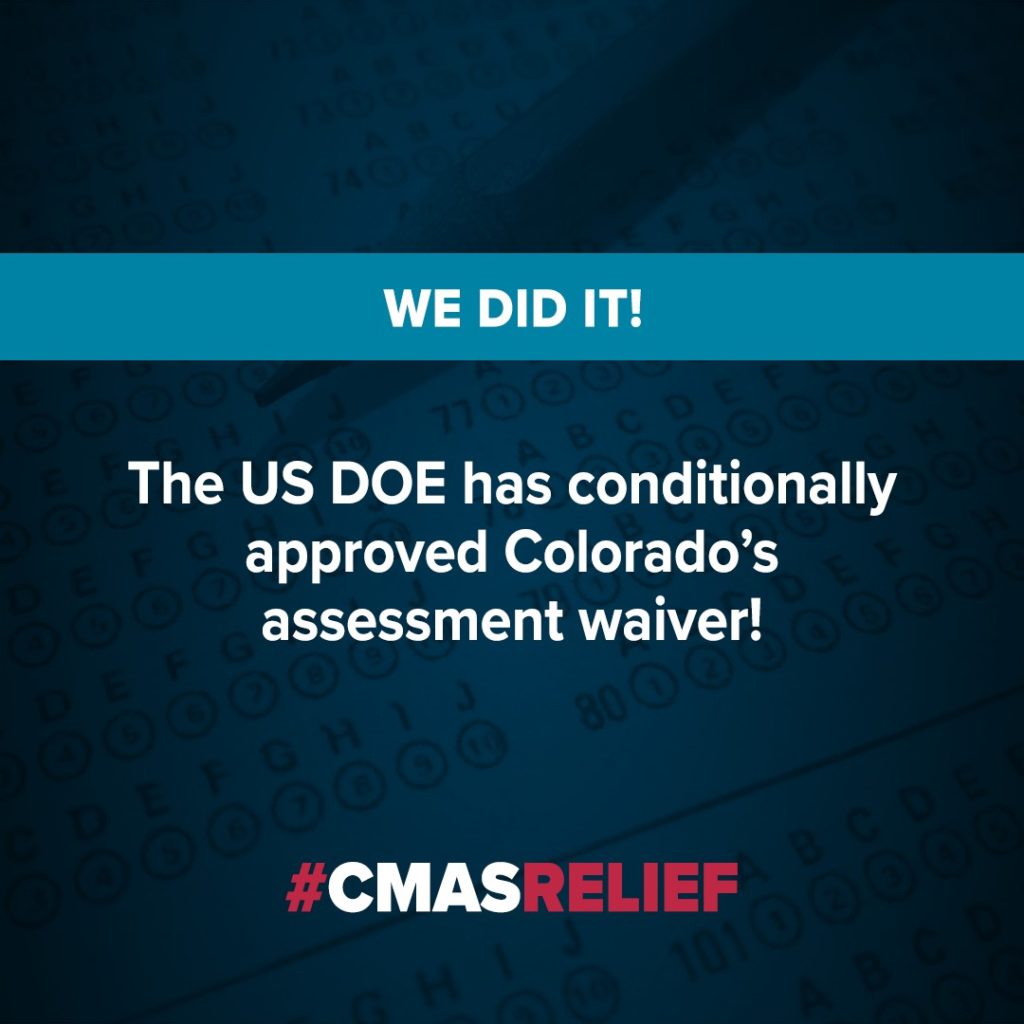 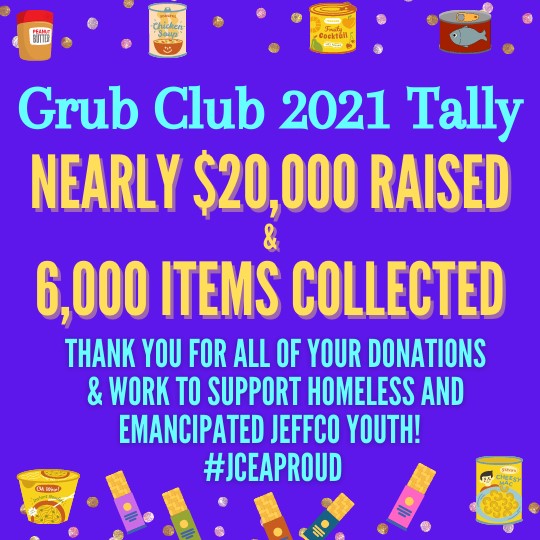