Your State wide Union is calling

CEA will host a tele-town hall for all members tonight, Tue., March 31, at approx. 6:20 p.m. We want to create space to ensure all CEA members have an opportunity to hear from and engage with union leadership. We will discuss COVID-19 updates, K-12 policy, legislative issues, and impacts to educators, students and our communities. We’ll have poll questions for instant feedback and Q&A time with speakers. Members will receive a call inviting them to participate in the live tele-town hall. Please join us tonight – your phone should ring around 6:20 pm

COVID-19 is upending life for students, families and educators. Workers are worried about what tomorrow might bring, whether it be infection or wage/job instability. Gov. Polis has shown brave and decisive leadership through all of this, but our state’s lower income and vulnerable populations need help with rent/mortgage payments and unemployment benefits. Our educators and students need distance learning policies, stable education funding and pay for all school employees. Sign this petition to tell the Governor that our students, educators, and working families deserve to be taken care of during this critical time.

Honoring one of the most influential
labor organizers in history

A true American hero, Cesar Chavez was a civil rights, Latino and farm labor leader;
a genuinely religious and spiritual figure; a community organizer and social entrepreneur;
a champion of militant nonviolent social change;
and a crusader for the environment and consumer rights.

Cesar’s dream was to organize a union that would protect and serve the farm workers whose poverty and powerlessness he had shared. He knew the history of farm worker organizing was one sad story after another of broken unions and strikes crushed by violence. He knew that for 100 years many others with much better educations and more resources than he possessed had tried, and failed, to organize farm workers.
He knew the experts said organizing farm workers was impossible.

Cesar’s motto, “Si se puede!” (“Yes, it can be done!”), embodies the uncommon legacy he left for people around the world. Since his death, hundreds of communities across the nation have named schools, parks, streets, libraries, and other public facilities, as well as awards and scholarships in his honor. His birthday, March 31st, is an official holiday in 10 states. In 1994, President Clinton posthumously awarded Cesar the Presidential Medal of Freedom, the nation’s highest civilian honor. The U.S. Navy named a ship after him in 2011.

As a common man with an uncommon vision, Cesar Chavez stood for equality, justice and dignity for all Americans. His universal principals remain as relevant and inspiring today as they were when he first began his movement. 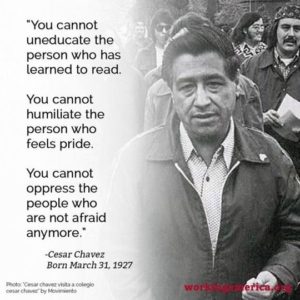